Eight Stirling’s empty shop windows have been transformed into vibrant works of art thanks to an ambitious project launched by the city’s Business Improvement District.

The Street Stories initiative features a range of animated artworks on eight shop windows, including the former BHS and Argos stores, in a move aimed at revitalising the city as it prepares to welcome shoppers back.

The ground-breaking project showcases the work of a range of Scottish artists including Jacqueline Marr, Michael Corr and David Galletly. Each artwork is brought to life via interactive Augmented Reality (AR) and forms part of a Trail telling the stories of Stirling’s people, heritage and history via mediums such as mosaic, dance, mural, digital and fluid art. 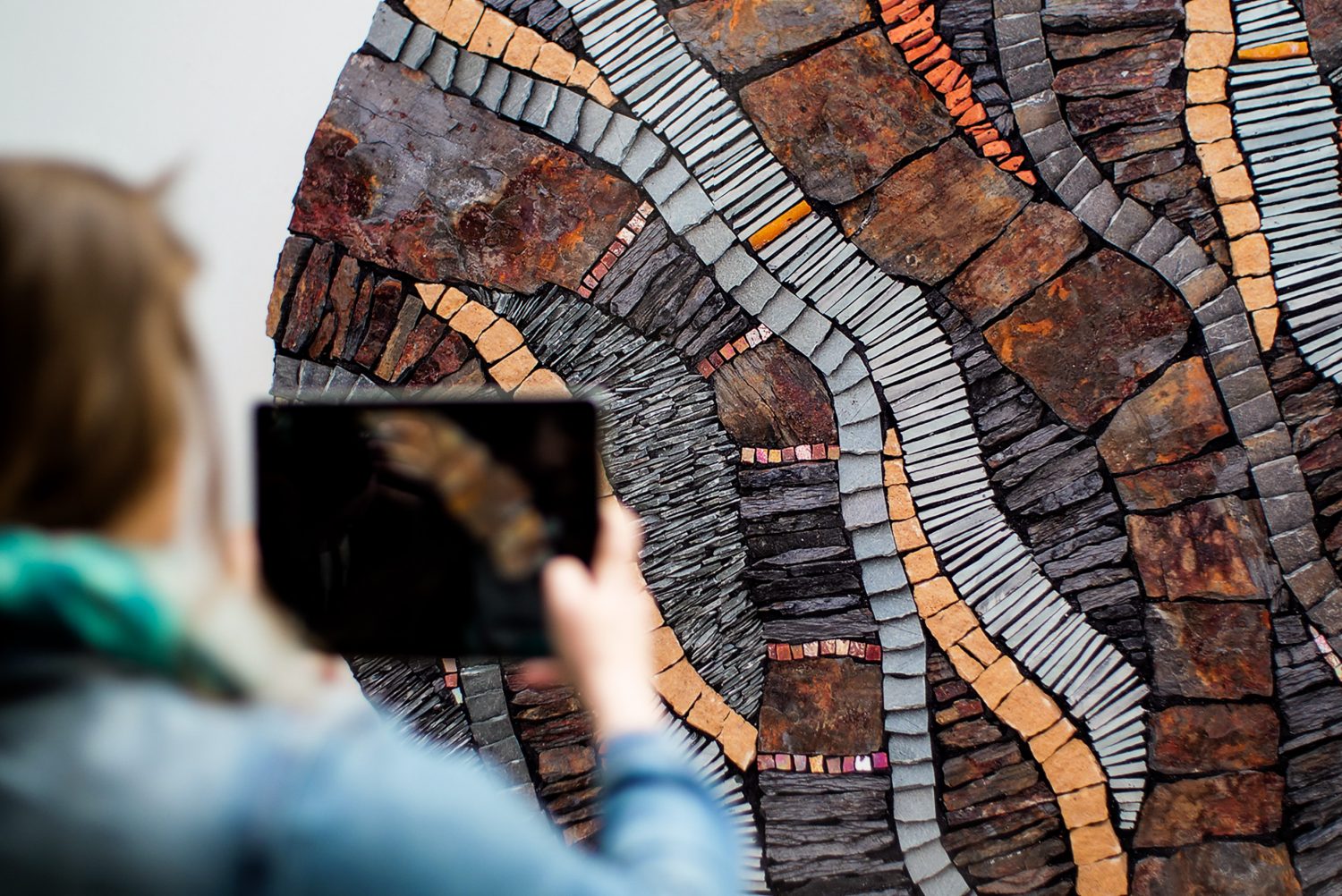 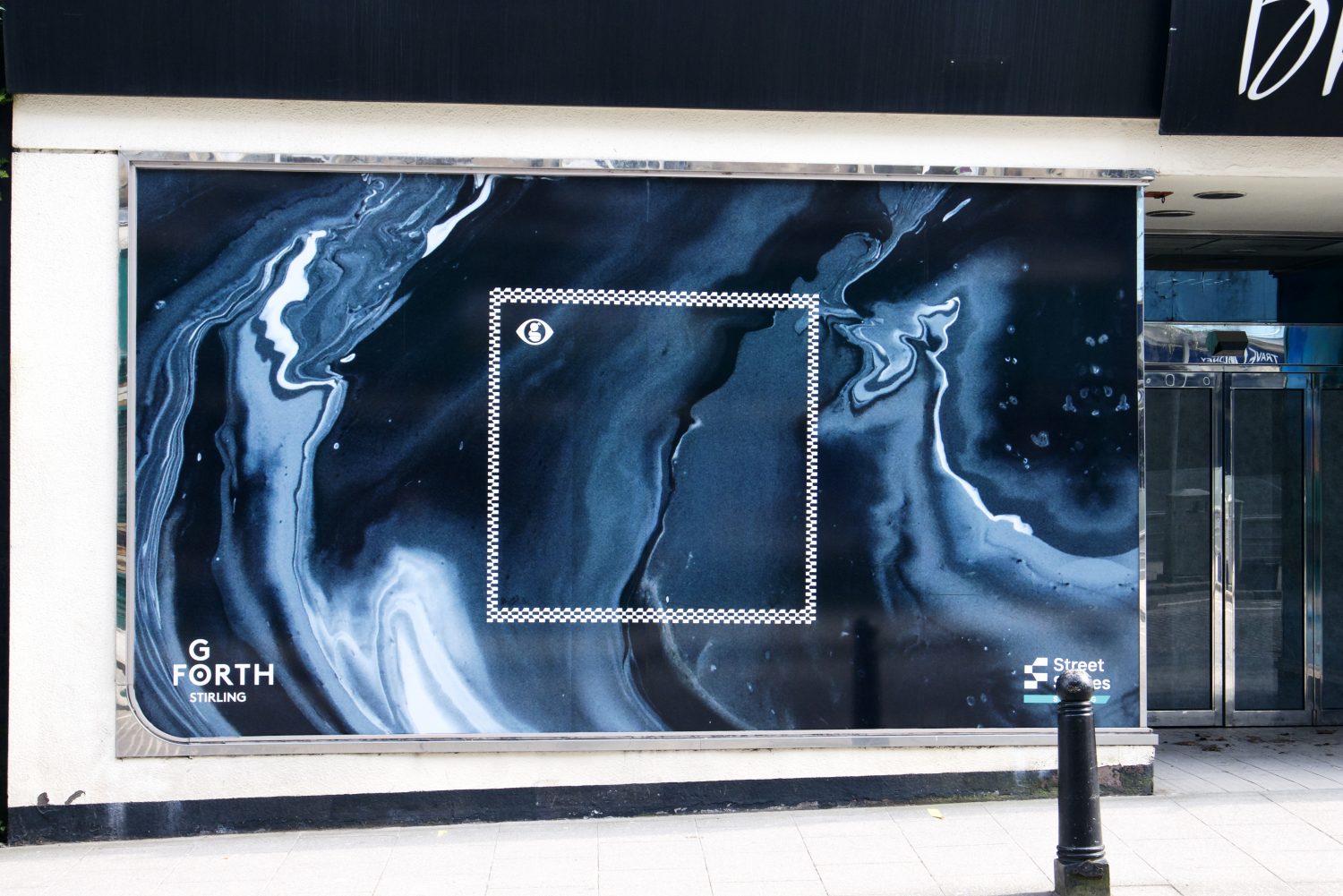 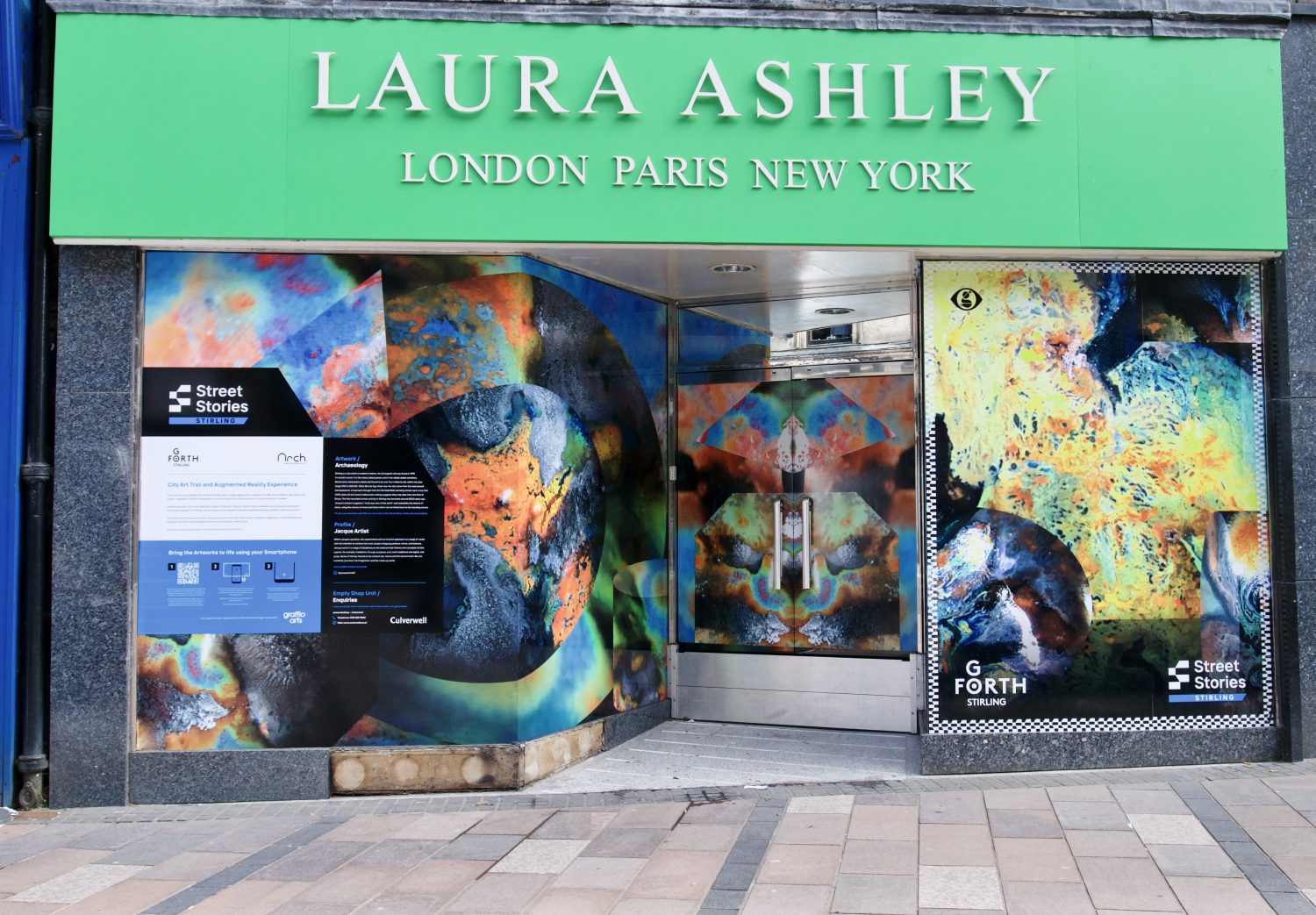 Eight artists were chosen for the project following an open invitation to submit art celebrating Stirling which could be brought to life via interactive Augmented Reality (AR) – multi-sensory animation triggered by a free downloadable smartphone app.

One of those chosen was mosaic artist Rachel Davies whose work, exploring Scottish slate and stone, is featured on the windows of the former Calvary Fellowship in Stirling Arcade and tells the story of the building of Stirling Castle.

She said: “I’m thrilled to be a part of this project and to see my artwork larger than life on the city streets. I really enjoyed going round the trail and viewing the animations and hope others will find it fun too.”

Fluid artist Roisin McKenzie is delighted to see her paintings of the River Forth animated on the windows of BHS in Murray Place. She said:

“I’m incredibly proud and honoured to have my work featured in this exciting and innovative project which is a great way to highlight the area’s artists. I was blown away by how huge and amazing my pieces looked on the windows. To see my artwork on that scale is incredible and the animation team have done such a great job.

I’ve had lots of positive feedback so far regarding Street Stories and how great all the windows look and a friend overheard a group saying what a difference it’s made already to Stirling which is fantastic.”

Alloa-based artist Michael Corr’s colourful mural of national poet Robert Burns has pride of place in the former premises of The Works on Port Street. He said: “I’m so grateful to showcase my art to a local audience thanks to Street Stories Stirling. It’s really cool seeing my work come to life and sharing some of Stirling’s Burns related history via the AR element. The art trail has created a really positive and inspiring change to Stirling’s city centre.”

Forth Valley College art student Lou Carberry uses her personal experiences of issues such as mental health to create striking works of art in a range of mediums. Her ‘Reaching Out’ series of drawings, which feature a hand reaching out for help, are displayed in the windows of the Trophy Centre in Upper Craigs.

She said: “The project will make our city feel less broken after the year we’ve all had and it’s been such a pleasure to be a part of it. The team who put the artworks together are beyond amazing and seeing my work printed and animated in such a way is something I never imagined happening in my whole career – never mind right at the start of it.

I got emotional after seeing my work up on the old Trophy Centre and it shows just how far I’ve come not only in my artistic career but in my personal life too. Everything I create is about evoking a sense of emotion in the viewer and it created such a response for me.”

Leading figurative artist Jacqueline Marr’s `Wings’ painting features on the windows of Designer Distinction in Murray Place. She said: “This is such an uplifting and exciting project for Stirling’s creative community and residents. The art trail is a great opportunity for residents to discover creative talents on their doorstop and learn about local history whilst inspiring and adding a sense of optimism to the High Street.

As a painter I aim to bring my subject to life on canvas and that is something the excellent team at Arch Creative have quite literally managed to achieve with the augmented reality experience. To see my Wings come alive and in flight is awe-inspiring. The animation echoes the realism I passionately produce with paint and has made me fall in love with my paintings on another level – a sentiment I hope others will share when discovering the project.” 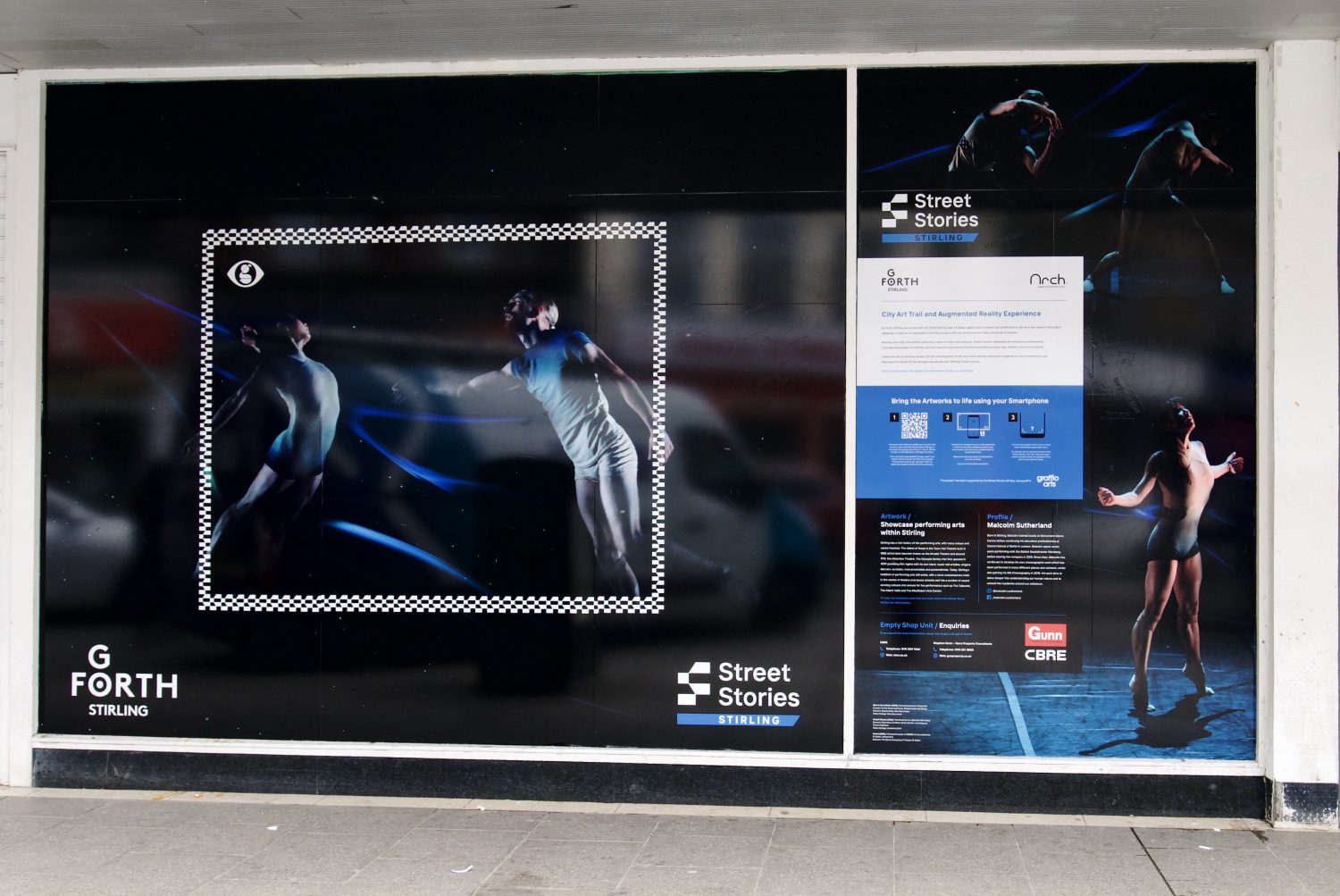 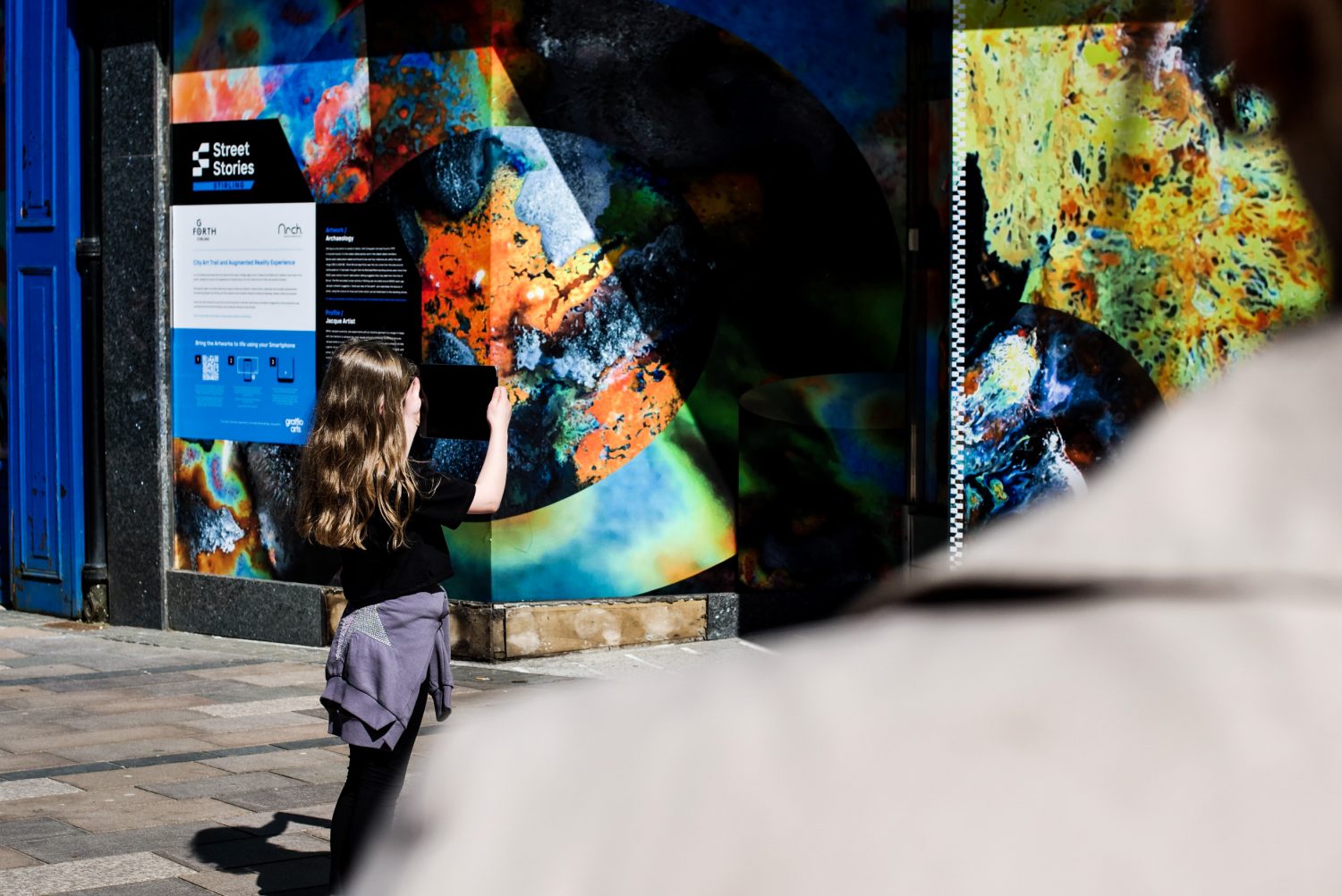 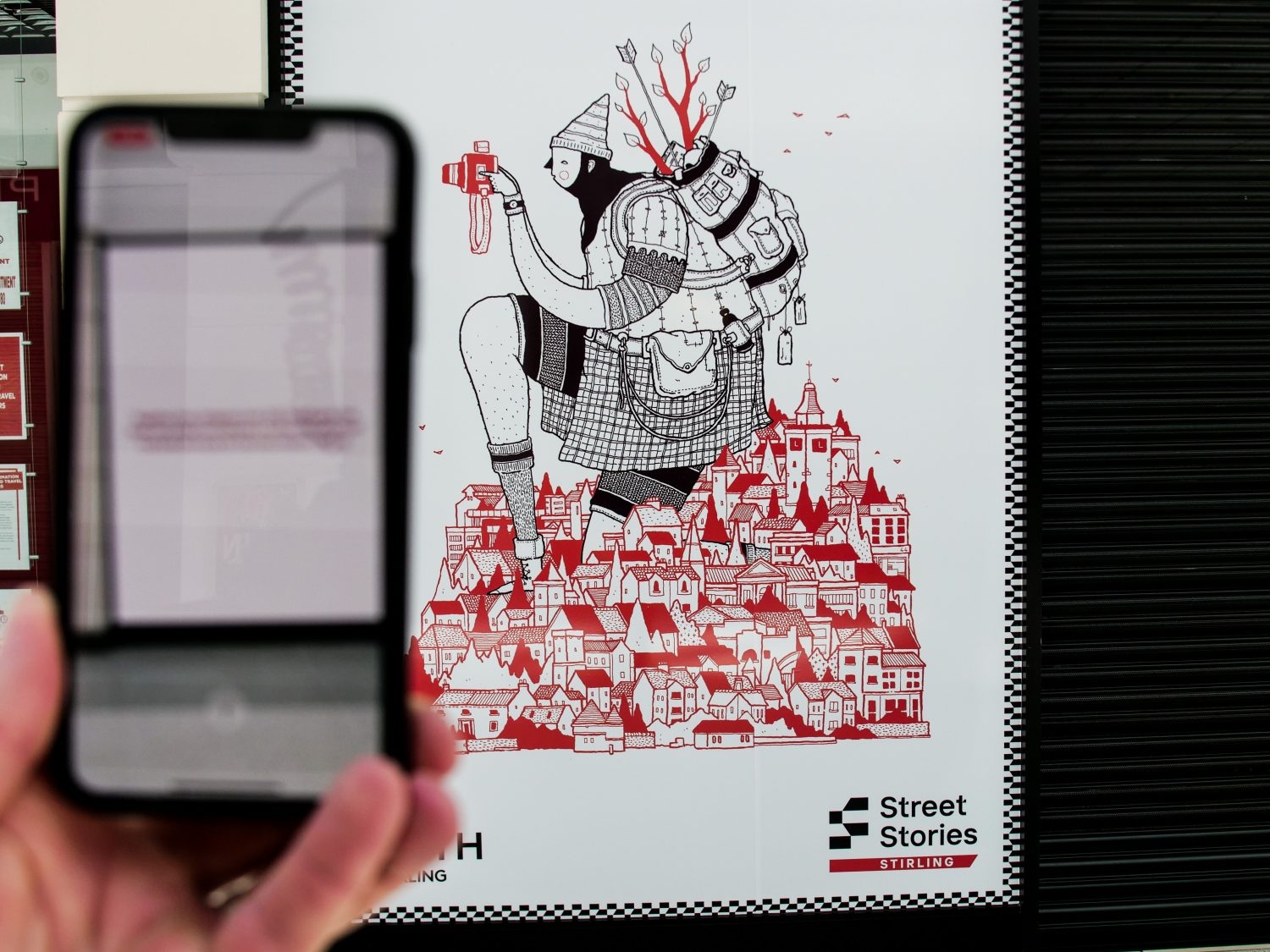 The project forms an art trail through Stirling taking in Port Street, Upper Craigs, the Thistles, Stirling Arcade and Murray Place with the aim of increasing footfall, enhancing the city’s appearance and highlighting which business premises are available for commercial opportunities.

The animations triggered by the free downloadable app will give visitors an insight into Stirling’s rich heritage and showcase the artists’ work in a way that hasn’t been seen before.

The Street Stories Stirling trail offers something for all ages to experience and enjoy.

More details about Street Stories can be found here – street-stories.co.uk/stirling/